An Associated Press article written on July 18, 2019 discusses Nero's bill, which would allow for the treatment and transportation of police K9s injured in the line of duty. The bill was filed by Rep. Will Crocker.

First responders would be allowed to treat and transport injured police dogs to veterinary hospitals under a proposal being considered by Massachusetts lawmakers.

Gannon was fatally shot last year while serving an arrest warrant. Nero was also shot, but because of current state law, EMTs weren't allowed to treat or transport him.

The legislation sponsored by Republican Rep. Will Crocker and Democratic Sen. Mark Montigny would permit emergency personnel to treat injured police dogs and bring them to veterinary facilities, as long as there are no injured people still requiring a hospital transport. 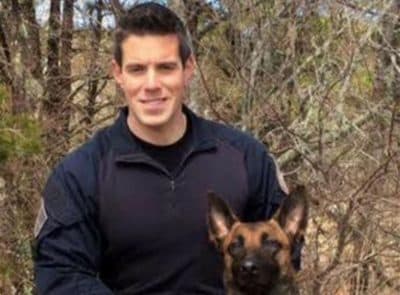 Yarmouth Officer Sean Gannon, who was killed in the line of duty on Thursday, with his dog, Nero (Courtesy Massachusetts State Police)