The Boston Globe editorial board announces it's support for H.2037, An Act providing for the care and transportation of police dogs injured in the line of duty. H.2037, known as Nero's Bill, was filed by State Representative Will Crocker. 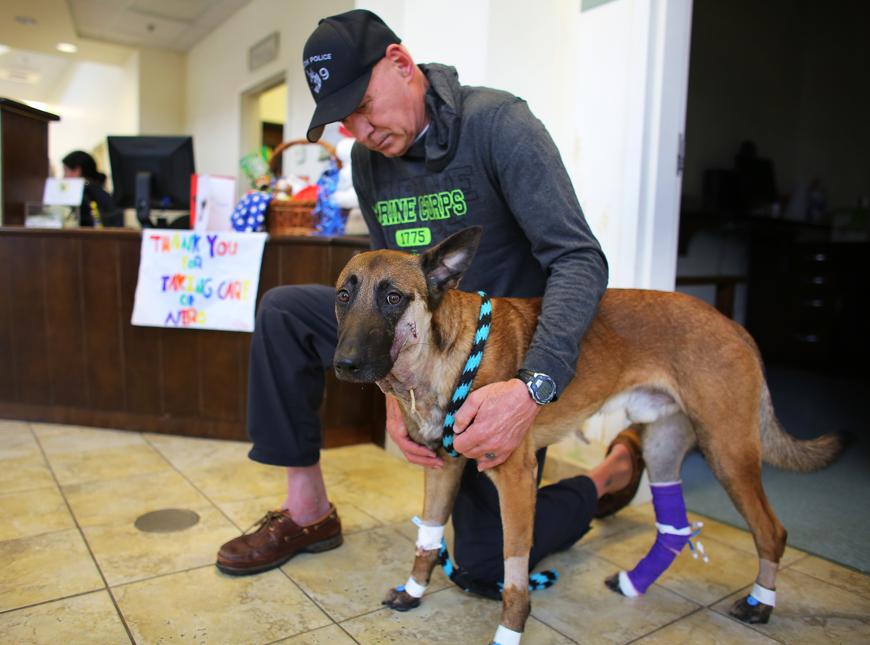 He called it “the most difficult and unfair decision of his 22-year career.’’

Barnstable Sgt. Troy Perry almost had to break the law to save the life of Nero, a police dog who had been gravely wounded on duty.

It was the day when Yarmouth police officer Sean Gannon, Nero’s K9 partner, was fatally shot in the head while serving a warrant at a Barnstable house last year. Nero, a Belgian Malinois, was also shot during the incident but he wasn’t found until more than three hours later, and only after police arrested the suspect, who had holed up inside the home. Nero was trapped inside, all the while bleeding to near-death.

Despite the fact that there was no shortage of ambulances, emergency teams, and first responders at the site, none of them were equipped — or even allowed — to treat Nero’s gruesome injuries in the face and neck. That’s because Massachusetts law prohibits emergency medical professionals from treating or transporting injured police dogs.

Perry, as the incident commander for canine operations that day, had to make a choice. He decided to drive Nero himself in his police cruiser; two other people, including the K9 officer who had trained Nero as a puppy, sat next to the dog in the back seat and tended to his injuries during the trip to a nearby emergency animal hospital.

Perry recounted the heartbreaking story last month during a State House hearing on a bill that would allow emergency medical personnel to transport working dogs injured in the line of duty, provided there is no person in need of an ambulance at the time. The legislation would also direct state officials to work in consultation with licensed veterinarians to develop standards of emergency care for working animals.

It’s hard to believe that only about a handful of states — including Illinois, Mississippi, and New York — have passed laws allowing first responders to treat and transport injured police dogs in emergency situations. It’s not like the required tools to do so don’t exist: There are canine trauma kits available for EMTs to carry in ambulances, and a national task force recently developed protocols to treat K9 dogs in emergencies, such as when they accidentally overdose (reports of working animals getting ill after accidental contact with opioids — including three in Florida in 2016 — have been significant enough that the Drug Enforcement Agency issued a warningfor canine handlers).

Gannon’s parents, Denise and Patrick, testified in support of the bill and spoke of the bond Nero and their late son shared, not just as working partners but as family members. “I would ask each one of you, as members of the committee, who would you leave in your family, in that state, for hours without being attended immediately? This is something we can fix. There are things that happened that can’t change, but we can change this,’’ Denise Gannon told lawmakers at the hearing.

Despite the delay in medical care and his grave injuries, Nero luckily survived after emergency surgery. The dog lives in retirement with Gannon’s widow, Dara, and Gannon’s other retired police dog, Thor.

The brave work K9 dogs perform involves great risk, just like that of any other law enforcement officer. It’s only right that police dogs like Nero have at least a chance for emergency medical treatment when they get hurt on the job.